A successful rhinoplasty results in a more balanced and refined nose which is aesthetically more pleasant to look at. In doing so, it brings about more harmony to the overall facial proportions, and enhances the natural beauty of the entire face. No matter what your ethnic background, all rhinoplasty share this same goal of bringing about more beauty and harmony to the entire face. A well balanced nose should provide a nice flow from the upper third of the face to the lower third, both on frontal and lateral profile. For optimal improvement of the overall facial profile and balance, patient should be carefully evaluated at the time of consultation whether a chin implant would be beneficial or not. Some patients may require more reconstructive surgery to repair a nose with C-shaped or twisted appearing nose, or a saddle nose deformity. Some may require a corrective surgery at the same time to allow better nasal breathing passages. For male patients, the surgery is never “over-done” and masculine features are maintained.

In many Caucasian patients, the nasal reshaping is considered to be a “reduction” surgery where there is an overall reduction in size of the bony and cartilage pyramid, which makes up the nasal dorsum. The tip of the nose is gently re-structured to appear more refined. Some may just need a subtle reduction of the dorsal hump or a subtle refinement of the nasal tip.

In most Asian patients, “augmentation” surgery is required where an alloplastic implant is used to raise the entire length of the nasal dorsum. The nasion (starting point of the nose) is also raised to allow a more smooth vertical flow from the medial aspect of the brow down to dorsum of the nose. In addition, the tip is lifted and refined by use of cartilage graft, usually harvested from the ear (conchal cartilage) or from inside the nose (septal cartilage). Please refer to Asian Rhinoplasty for further information.

There are two approaches to performing a rhinoplasty. “Endonasal” approach is through an incision hidden inside the nose. “Open rhinoplasty” approach is through a v-shaped incision made in the columella skin between the nostrils. The degree of reshaping and refining is ultimately based on a comprehensive discussion between the patient and Dr. Kang at the time of consultation. Dr. Kang will the advise to the best approach as well as the best combination of techniques to achieve the most natural and balanced appearing nose.

Quite often in Caucasian patients rhinoplasty usually involves “reducing” the prominence of the nasal dorsum, narrowing the width of the naso-facial angle, and refining the tip. In most Asian patients, “augmentation” surgery is required, and Dr. Kang prefers to perform his Asian rhinoplasty using a combination of alloplastic implant to augment the bridge of the nose and cartilage graft to augment and enhance the nasal tip. Both the nasal bridge implant and cartilage tip grafts are always custom sized and crafted for each individual patient to give the most natural enhancement possible.

The augmentation of the nasal bridge is performed using an alloplastic implant to naturally raise the entire length of the dorsum (bridge) of the nose. The nasion (starting point of the nose) is also “imperceptively” raised to fill in the “flattened” space in between the eyes, allowing a more smooth transition from the brow to the nose. This raising of the nasion does not stretch-open the inner aspect of the eyes like some people want. However, by filling in the “flattened” space between the eyes, it almost creates an illusion that the eyes are more open and closer together. By enhancing the bridge of the nose, the nasal tip appears proportionally less broad and boxy. Finally the often too prominent cheek bones of the Asian face appear de-emphasized when the flattened bridge of the nose is made more prominent through the augmentation surgery. There are a few very important guidelines when performing augmentation rhinoplasty using alloplastic implants. First the pocket for the implant needs to be meticulously made in the “correct” surgical plane, which is not always easy to do when the incision opening is no more than a nail width of your finger, well hidden in the inside edge of one of your nostrils. Second, the implant should never be “too” large for the available pocket that the individual’s nose will allow. Third, Dr. Kang prefers to use straight implants rather than the L-shaped implants which can at times, place a significant “pressure effect” on the tip skin as well as impart a rigid “artificial” appearance to the tip shape. Finally, even with a straight implant, Dr. Kang still recommends a cartilage tip graft so that it acts as a buffer, preventing the end of the implant from putting pressure to the inner skin of your nasal tip. 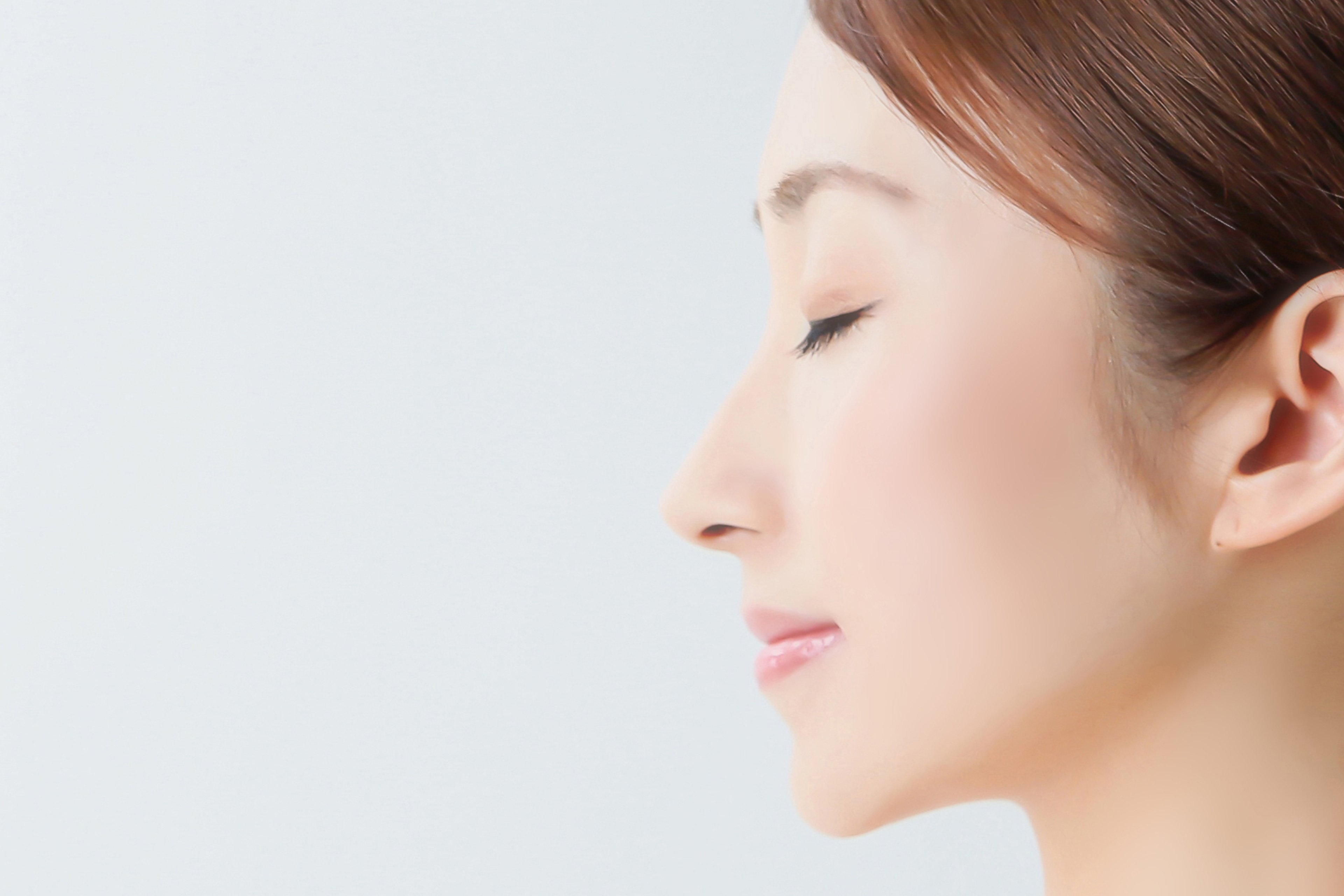 The goal of tip-plasty is to refine the shape of the tip and enhance its proportional relationship with the nasal bridge and the entire face. In Caucasian patients, this usually entails reducing the tip bulbosity through finesseful “resection” and suturing together of underlying cartilage framework to achieve a more refined appearance of the tip complex. In Asian patients, tip-plasty usually entails finesseful “addition” of cartilage graft, harvested from the back of your ear. Your ear shape will never change and the incision made in the back of the ear heals imperceptively. Once in a while if your septal cartilage is being repaired at the same time for improved breathing, he will also harvest grafts from the septal cartilage as well. Dr. Kang believes tip portion of the surgery is what sets a natural appearing surgical outcome which appears curvaceous and organic from artificial appearing outcome, which appears rigid and artificial. Although this is the most complex part of the surgery, due to Dr. Kang’s expertise in artistic carving of the cartilage grafts and accurate placement into the tip region, he will create the most refined and natural appearing nasal tip which in turn enhances the “natural” appearance of the alloplastically augmented nasal bridge. Finally, through accurate placement of the tip graft(s), a right combination of increasing the tip projection, rotating or de-rotating the nasal tip, and even lengthening the nose can be achieved. Occasionally, based on skin thickness, integrity of cartilage framework, and degree of fibro-fatty deposit in the soft tissue of the tip, Dr. Kang may recommend “open rhinoplasty incision” approach (inverted v-shaped incision made in the columella skin between the nostrils), but usually prefers to perform the surgery through “closed marginal incision” approach (completely hidden inside one of the nostrils).

Dr. Kang always reminds the patients that the best chance for successful outcome is during the first time at the surgery, and disagrees with the notion that the implant surgery can be easily revised. This is why he will recommend at the time of consultation the best combination of techniques to achieve the most natural and balanced appearing nose, which should last a lifetime. When a patient comes to see Dr. Kang for revision surgery after the procedure was done someplace else, he comprehensively counsels the patient as to the pros and cons and, only advise for a change if there is strongly compelling reason, including active or impending complication from the previously placed implant or obviously unacceptable cosmetic outcome. And yet, due to Dr. Kang’s expertise and vast experience of having personally performed hundreds of Asian rhinoplasty as he is entering into his 25th year of practice, a significant percentage of his rhinoplasty practice includes revision surgeries, referred to him by his previous patients or other doctors.

When you come to see Dr. Kang for consultation, please look at his portfolio to see all the different variation of rhinoplasty to see how well versed he is in the “art” of Asian rhinoplasty. Just as in creation of three dimensional art piece and just as different our face is from one individual to the next, Dr. Kang firmly believes that although the technical execution may be similar from patient to patient, the result of the rhinoplasty should always be unique to best match that one individual’s face.